In the nineteenth century, until it was diverted underground, the Upper Norwood tributary of the river Effra flowed down Gipsy Hill on its way from Crystal Palace to South Croxted Road, forming the Camberwell parish boundary with Lambeth and also the limit of the Dulwich Estate. The meadow on the Camberwell side of this stream has been known by various names in the past and an 1890’s photograph reproduced on the facing page shows cows grazing on what were then called ‘French’s Fields.’ Now known as Long Meadow and leased by the Estate to Southwark Council, the line of black poplars on its boundary with Gipsy Hill are a reminder of where the stream formerly flowed.

Black poplar is a species which was frequently planted alongside rivers and streams and in wet meadows. Also known as water poplar, it thrives in soil subject to flooding. Until about 1850, native black poplars would have been planted, but they went out of popularity around that time, due to the introduction of faster-growing and more upright hybrids of black poplar with an imported American poplar species, populus deltoides. Old native black poplars are

therefore uncommon and those which are still in existence are likely to have been planted before 1850. Old native female examples are particularly rare, as their fluffy seed has caused them to be considered a nuisance.

Black poplars are not planted often now, especially in cities, as they are only suitable for open spaces. There are a couple of huge old specimens, one male and one female, almost certainly hybrids, on Peckham Rye, but even these are uncommon. According to Will Walpole, the Parks Manager, Southwark is unusual in still having any old female black poplars, as most boroughs have got rid of them.

Most of the black poplars on Long Meadow appear to be various male forms of the species, but there is one female tree, which is conspicuous by shedding copious amounts of fluffy seed around the bus stop. I referred to this tree in my article on black poplars in Autumn 2010’s Journal, when I speculated on whether it could be an old native tree, as it appeared to have all the characteristics of a native specimen. It has been heavily pollarded, but its features can still be appreciated, especially its distinctive burred trunk.

The Forestry Commission scientist, Stuart A’Hara, was interested when I subsequently sent him leaves for DNA testing, as he is always hopeful that a new genetic strain may be discovered. His DNA test confirmed that “ the tree is indeed a native Populus nigra subspecies betulifolia and not a hybrid”. However, he went on to say that it was a genetic strain which was already known, so “it is not a particularly interesting clone in terms of conservation value, but I’m sure that does not take away from its local significance as a native black poplar.”

The native black poplar, populus nigra subspecies betulifolia, has a common ancestry with other south-eastern European black poplars which survived the Ice Age, but, following that time, it developed independently in Britain. It is therefore genetically distinct from other European black poplars, such as the Italian Lombardy poplar. It’s a massive tree, some 20-30m in height, with arching branches, a burred trunk and a tendency to lean. Historically, it was planted on farms, especially on field boundaries. It was a valuable timber tree, with multiple uses, from making carts and furniture, to matchsticks, being strong and light, with shock-proof and fire-resistant qualities. It can live for 250 years or more. It is a valuable tree for supporting wildlife and has its own specific gall-forming aphid species which is only found on true black poplars and its cultivars, not on hybrids of the species. Even these aphids are interesting, having “soldiers” in their colonies, which attack predators.

Its natural habitat is floodplain forests – an environment which no longer exists in Britain. For natural reproduction from seed, male and female trees need to be in close proximity for pollination and the soil needs to be muddy, with regular flooding. Due to these very specific requirements, it no longer reproduces naturally from seed in the wild – it is propagated from cuttings. As a result, throughout the country, there is very little genetic variation, as a tree grown from a cutting has the same DNA as its parent. Around 1990, it was realised that the native species was not adapting to changing conditions as it was not regenerating naturally, also that there were very few surviving examples nationally, as they were no longer being planted. The Forestry Commission, in co-operation with other agencies, has since taken steps to identify and conserve the few genetic strains which have been found of the wild British species.

The other tree I mentioned in my 2010 article as a possible native specimen, a male tree on the corner of Piermont Green and St Aidan’s Rd in East Dulwich, has also been confirmed as a native of the species by DNA testing. The Forestry Commission have identified it as a male cultivar commonly known as the Manchester Poplar, which was much planted in the 19th century.

So these two trees are interesting remnants, marking the boundaries of former meadow and farmland. Southwark Council were very interested when we informed them of our two discoveries, as, apart from some young trees the council have planted in Russia Dock woodland, they know of no other native black poplars in the borough. These two trees are elderly, so the council’s Tree Department is intending to take cuttings in the autumn, not only for use within the borough, but also to cultivate native specimens to sell.

Meanwhile, on the boundary of Long Meadow, the Dulwich Society has funded the planting of three young black poplars, cultivated from old native trees in Thurrock. These new trees were planted by the council’s contractors in March and the cost includes three years’ maintenance by the contractors. The sexes of these new trees are not yet known, but they will be able to be identified by their catkins – male catkins are red and appear late March/early April. Female catkins appear soon after and are yellow-green.

Until now, Long Meadow has simply been designated by the Council as open space, but in the latest draft version of the Southwark Development Plan, it is proposed to upgrade the status of Long Meadow to a site of Local Importance for Nature Conservation. The Ecology Officer made the recommendation, citing the boundaries as the feature of most ecological interest – “The edges have been managed as a native hedge with standard trees. The diversity of native trees make a positive contribution to the site’s ecological value.”

The Parks Manager is in the process of drawing up a management plan for Long Meadow and the Dulwich Society has registered its interest in being fully consulted.

The Southwark Local Plan has been revised in 2018, and Long Meadow designated as Site of Importance for Nature Conservation (SINC), along with Gipsy Hill cutting.  See Adopted Policies Map.

The Friends of Gipsy Hill in giving this area the highest level of protection, by further designating as Local Green Space. 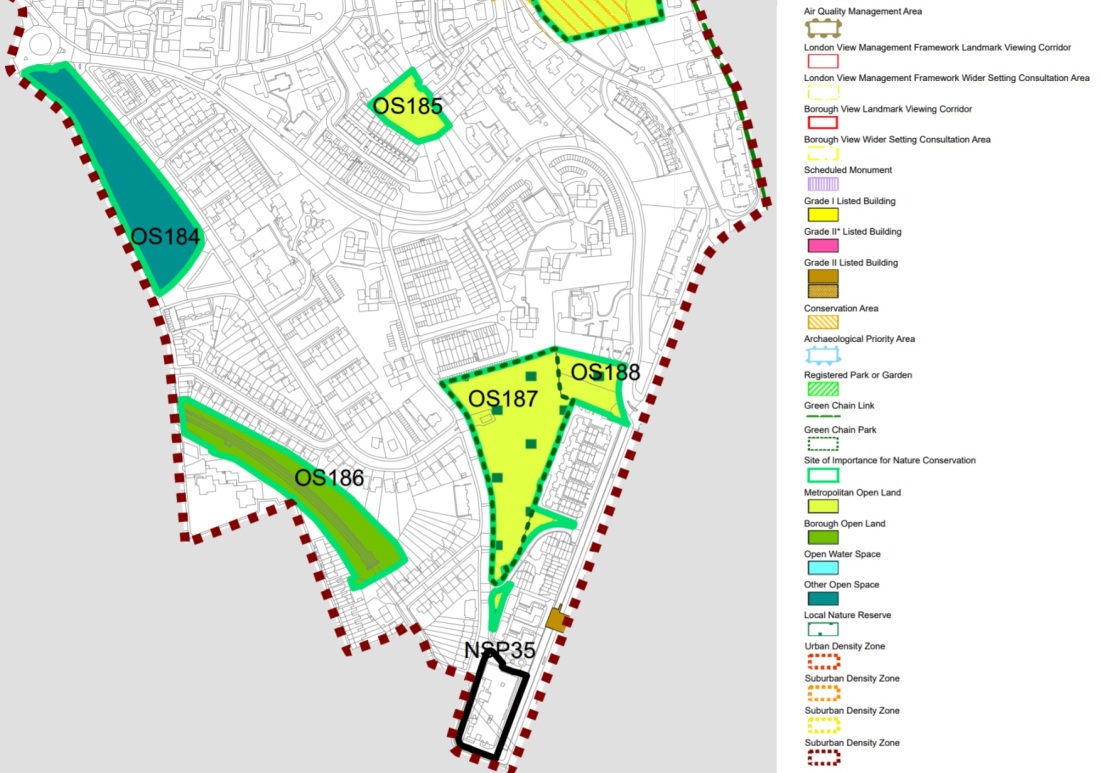 For more information or query to Friends of Gipsy Hill, contact gipsyhillfriends@gmail.com